A cruise to Papua New Guinea

P&O Australia have introduced a number of new ports in Papua New Guinea to their cruising itineraries.

On 31 Oct 2013, we joined Pacific Dawn for the inaugural cruise to some of these new ports - being Alotau and Doini Island in the Milne Bay Province and Kiriwina Island in the Tobriand Island group.  This cruise was "inaugural" in a number of senses - it was the first time that this cruiseline and this particular ship has sailed to ports in this area, the first time a large cruiseship and all its passengers have arrived in time to participate in the annual Canoe and Kundu Festival in Alotau, the first time that a large cruiseship has landed its passengers on the isolated Kiriwina Island with its first and newly built jetty (and the first time a PNG Prime Minister came as well) - and almost the same for Doini Island (but no PM)

This was quite a "mind blowing" cruise -- the most exhausting, confronting, overwhelming and culturally interesting I have ever done - and I am oh so happy that we seized the late opportunity to do it.
No comments: 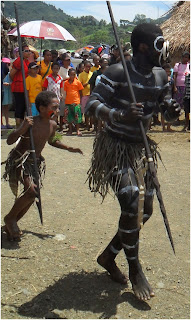 As previously stated, there were many aspects of this cruise being an "inaugural" one. One thing is for sure, it was the inaugural visit by any large cruiseship to this Festival - and I think the visit was a great success. We enjoyed the Festival so much - that I wouldn't mind flying up to Alotau one year to visit the Festival again, only this time, for the full duration of it. Our visit was actually on a Monday - and this time the Festival was extended by one day to cater for the visit by the cruiseship. It was certainly a very busy day with a lot going on -- but I wonder what it would be like to stay in an hotel in Alotau for the duration and see what happens each day. I wouldn't be surprised if the participants weren't even more energetic on the first day of the Festival -and it would be interesting to see the Festival Village being erected.

It was quite hot - being November -- so we bought a golf umbrella to shade us. They seemed to be selling like hot cakes!!

I don't know if I would care too much for Alotau when the festival is not on - it is not a particularly scenic town and we noted very heavy security at the entrances to all stores in the main street. I am not aware of what the problem is there - if any - for such security measures. Was it because of our presence??

Some nice pics of the the Festival HERE  - and my own photos bundled into a video HERE. 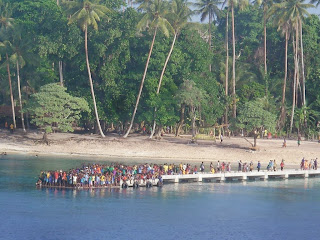 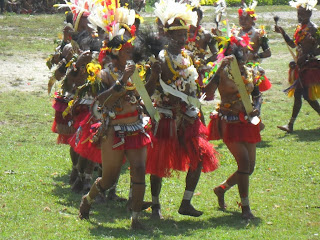 Our second port of call was at Kiriwina Island, the largest island in the Tobriand Group. The island is quite large and is home to some 12000 people, most of whom live subsistence lifestyles. I hesitate to call our place of stop as a "port" - as no cruiseship had ever disembarked some 2000 passengers on this island ever before -- except perhaps in World War 2. Nevertheless, it was a really BIG day for both us and the local island residents. I am still unsure of what they were thinking at the end of the day - a huge cruiseship appeared close offshore, disgorging 2000 white people (which was a shock to the very many children there - it must have been because later in the day while I was swimming, a child swam up to me and tenderly and a little fearfully touched my face - and asked me what my name was). On top of all this, for the first time ever, the PNG Prime Minister and his entourage flew into the island by helicopter - and all this to open the only jetty that the island has ever seen (once again, at least in recent times -- perhaps there were landing places in WW2??)

Yes -- it was a BIG day!!!  - and probably as overwhelming for the locals as it was for us.

It became very hot that day - but we didn't want to miss anything, so we stayed on the island for as long as we could. There was a lot going on - traditional dancing, and we simply talked to many people. Some could speak quite good English while others not. A fair bit of money was left behind on the island -- the islanders had obviously been well organised by (the PNG Government ??) to sell their craft wares -- I bought a beautiful carved wooden walking stick, inlaid with mother-of-pearl. I am not sure how or where the islanders will spend their new found wealth - because there is no cash economy on the island at all among the 12000 residents. One man told us that if he were to get come cash money - he would be able to use it at "the Station" -- whatever that means , I think it must be some kind of Mission Station??

You can see where the island is HERE   There is only one road and the jetty has been built at the northern end of it.

I have made a video of some photos that we took (HERE)  and also of the famous Trobriand Island style of cricket (HERE)  -- but a Google search reveals far superior photography than mine (Kiriwina Island)  and (Tobriand Cricket)   Their cricket is just a little bit different to ours -- they have a bat and ball and a bowler and batsmen -- but just a few more fieldsmen ( I believe up to 300!!) . The object of the game seems to intimidate the batsman as much as possible with singing and dancing and mass rushes towards him before he receives the ball being bowled at him.

All things considered - this was an exhausting and overwhelming day -- but a wonderful day and probably as good as it gets when cruising to see different cultures.

Doini Island is a small privately owned island south of Milne Bay. See here  - Google Map  It has been developed as a small resort. Although small, it is very scenic and really needs more than the one day we had to get around it all. The resort website is here  and a Google search on Doini Island reveals a wealth of info about the island.

We took a general walk around, had a swim and enjoyed a sausage sizzle on the beach with a few New Guinea beers. I understand that up to 100 people live on the island. The resort takes both AUD and KINA - however I recommend that you bring some KINA with you.

I have created a short Youtube video of some photos that we took while HERE.